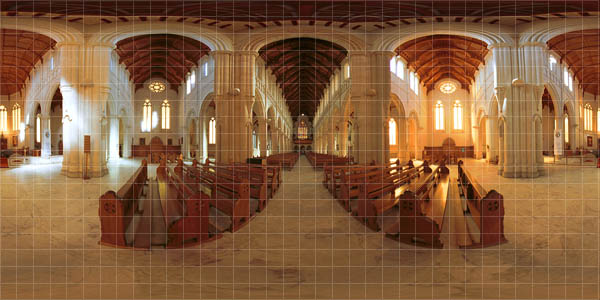 The Equirectangular projection is the default output format of a rotating (scanning) panorama camera equipped with a fisheye lens -- 180° fisheye giving a full sphere at 360° rotation. Scanning cameras sometimes cover more than one 360° turn but software often assumes that equirectangular images cover 360° horizontally and 180° vertically, i.e. make sure that your equirectangular image has a proper aspect ratio of 2:1. Look at the pixel values -- a file with 1650 x 824 pixels lacks one pixel at the short side thus confusing some applications.

The Equirectangular projection is commonly used as the projection type of the source images for spherical panorama viewers, including PTViewer. The other possibility is the Cubic Projection.

The polar regions of an equirectangular image are extremely distorted, making retouching of these areas very difficult. Some tips are given in the Zenith and Nadir editing overview tutorial.

There are related problems with automatically blending seams near the poles. None of the tools that perform blending such as PTStitcher, Enblend or SmartBlend feather equirectangular images differently to any other projection type.

So if you find that seams are running very close to the zenith or nadir, you may need to stitch the entire scene in a different orientation to get good results.

There are more related problems with local tone mapping operators which produce strange results near the poles. The solution is to either use global tone mapping or retouch the zenith and nadir manually.

Equirectangular images have a very large amount of data redundancy near the poles because they are stretched in the 'latitude' direction. When downsizing an image in an editor such as Photoshop or GIMP, the effective resolution of the image is decreased as expected except near the poles.

This can cause strange radial artefacts when viewed later in Panorama Viewers. The solution is to always switch to a less distorted projection such as Cubic Projection before scaling, blurring or sharpening a panorama - Switching back later if necessary