Difference between revisions of "Unusual remappings"

I prefer to use one of the GUI front-ends, since they allow for a more convenient control. I've used PTGui here but it should be possible with hugin, PTAssembler or PTMac in a similar way. 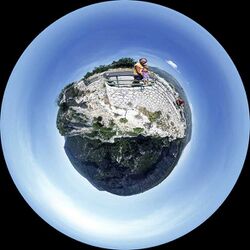 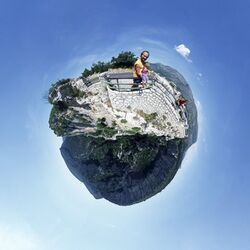 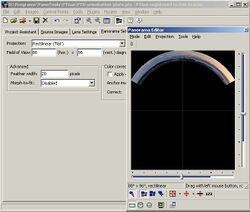 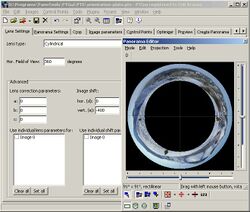 Pano editor and lens settings for 360 degree in PTGui

In the example case this is

Enter the result as a negative value in the vert.(e) Image shift field (-2031 in the example case).

You might want to crop the result image in your image editor in order to get rid of the black space.

In Hugin you could do the following steps:

Since the source panorama is arched, the pixels have to be compressed at the inner side and stretched at the outer side. There is a line in the middle where there is no stretching or compression. In most cases it is desirable that this line is the horizon which is assumed to be half way between upper and lower edge of the panorama. If you want this line to be somewhere else simply use a different image shift (e) value. For example -2231 will shift 200 pixels further down (nearer to the center of the result image) than -2031 and create a smaller and narrower arc.

actually calculates the virtual radius (half of the diameter of the cylinder it is projected on) of the cylindrical source image in pixels. We will need this value r for the following calculation.

Result images might get very large large since they have to be symmetrical to the center point of the arcs circle, which requires a lot of black space especially if the source panorama HFoV is low. Occasionally PTGui pano editor doesn't show the correct result image (although PTStitcher will create the arc correctly) making it impossible to adjust the panorama size manually.

In both cases it might be interesting to create the minimum possible size that covers the whole arc. Since Fit Panorama (in PTGui pano editor) fails in this case we need to calculate the values ourselves.

where e is the positive Image shift you entered in the vert.(e) Image shift field as a negative value and r is the radius from two paragraphs above. In our example:

If your source FoV is lower than 180 degree like in our example the resulting horizontal Field of View (rhFoV) can be lower than the vertical FoV (rvFoV). This can be calculated by

It is advisable to choose slightly larger values for both horizontal and vertical result FoV in order not to loose any pixels.