Remember the shaky videos of rockets being launched from the old days?

Did you see the modern NASA videos , where the FRAME bounces around the object being filmed, while the rocket remains perfectly stable in view? Thats' what you'll be able to do after reading this tutorial.

Sometimes you find yourselves with some time on your hand, a nice camera, a nice scene that would look nice in a time lapse movie, but no tripod and/or computer to take shots in exactly the same position in an exact time-sequence.

Just point the camera at what you want in your timelapse, and take shots, at regular intervals, as consistent in time delay and direction as you want/can.

You can play a sequence of jpgs using mplayer with:

If you put the shots together like this the image will bounce and shake a lot, because you didn't point the camera in exactly the same direction every time.... This is where tripods excel above humans.

So, hugin to the rescue!

First, I reduced the size of all the jpgs by a factor of 4 in each direction. This gave me frames of about video quality, greatly reducing the amount of CPU time required to process the many images. 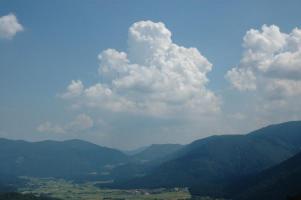 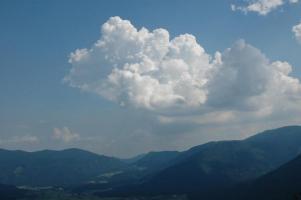 I then started up hugin and loaded all the images.

Now to match all the images I have to do the control points manually, because this is not the "normal" use of hugin. However, for someone intimate with the workings of Hugin and the surrounding tools, it should be quite possible to modify one of the tools to allow doing this automatically in the future.

On the control-points tab, select image 0 on the left, and image 1 on the right. Now match two or three points in the image.

Next, you would normally match image 1 to image 2, and so on. In this case I recommend you match every image to image 0. So next you create several controlpoint matches on images 0 against image 2.

Next, I selected "equirectangular" for both the source images (under the "camera and lens" tab) and the destination (under the "stitcher" tab) (this may acutally not be the best selection, as hugin might also correct for lens distortion on the way. But at least it keeps things simple...)

Current "best practise" suggests that "rectilinear" for both the source ("camera and lens" tab), and the destination ("stitcher" tab), is the best combination. However, the FOV or focal length better not be too far off.

Next, I selected "high quality tiff" and "nona" as the stitcher. This triggers the creation of intermediate TIFF files which we're interested in.

Next click: "calculate field of view" in the stitcher tab, and "calculate optimal size".

Next, click "stitch now". In my case, the final enblend step crashed due to an installation error. This is ideal: We don't need it. Consider making the binary not executable for the duration of this project, or putting another program of the same name in your path, or configuring hugin to call some program that doesn't exist.

Actually, it's better to choose "Multiple TIFF files" in currently released hugin version, and "Remapped images" in current trunk - that way only remapped images are created and hugin does not try to run enblend or other programs.

After entering the name "test.tif" as the output file, you will be left with realigned tiff files called test????.tif! You can then convert these to jpeg with:

now you can play them with:

The bouncing should be greatly reduced!

Here are two of the resulting images. 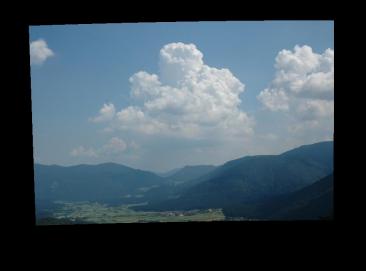 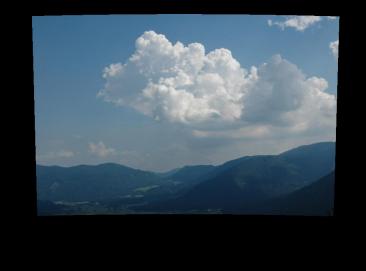 Next, you can trim off some of the bouncy edges. I used pnmcut while the files are in PPM format in the last conversion: 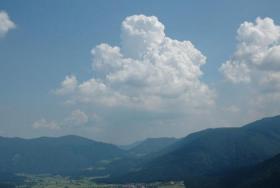 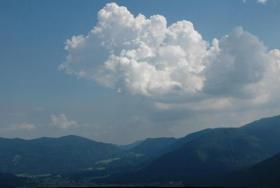 I then encoded the sequence of frames using:

And here is the final 160 frame avi file: http://prive.bitwizard.nl/timelapse_final.avi

The inline scripts in this page are written in "bash". If you use tcsh, the syntax is slightly different. If you're on MS Windows, I don't know how you achieve such operations.

This tutoral was written by R.E.Wolff@BitWizard.nl . Feel free to Email me with suggestions or ways to do this easier. As this is a WIKI you could also edit this directly.

In newer versions of hugin, an application "align_image_stack" is available. This is not yet released, but a windows application executable is available. Unix users will have to get and compile from the subversion source.

I tried it, and found that the results of "align_image_stack" are worse than what I started with. My test case had lots of clouds, and it apparently was finding points on the clouds instead of on the mountains that remain stable.