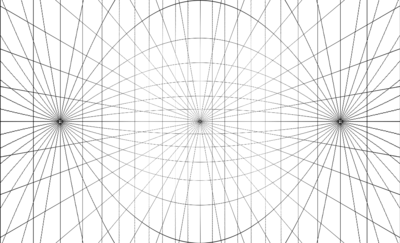 There are two kinds of squeeze, 'hard' and 'soft'. A hard squeeze can fully straighten horizontal lines, but only works on fields of view well under 180 degrees. A soft squeeze provides less complete straightening but works for wider fields of view. Of course you don't get something for nothing:

Two secondary parameters, labeled 'Tops' and 'Bots', control vertical 'squeeze' adjustments applied to the top and bottom halves of the image, for the purpose of reducing the curvature of horizontal lines. These have a range of -100 to 100. There is no squeeze when the parameter is zero. Positive values invoke a 'hard' squeeze, that can exactly straighten horizontal lines, but only over a limited range of about 160 degrees. Negative values invoke a 'soft' squeeze that works for wider fields of view but cannot eliminate all curvature.

Hugin with the general Panini projection is an excellent 'de-fishing' tool. Load a fisheye image; adjust pitch and roll angles to make all vertical lines vertical in the view, then adjust the g.P. parameters for a good perspective. Note that you can now adjust pitch and roll by dragging in the fast preview window.

If vertical lines look curved in the general Panini projection view, you should adjust the lens focal length or FOV until they are straight. The same applies to horizontal lines when the squeeze parameter is set to 100%. For even better results, you could set the lens fov and a,b,c distortion parameters to values that were optimized on a well-aligned spherical panorama made with the same lens.

With a properly aligned panorama as the source image, the general Panini projection can be used like any other projection to render views in various directions, but it is best for views where the line of sight is level, not tilted up or down. You can use hugin's cropping feature to eliminate unwanted areas at the top or bottom, however to get a perfectly framed view it may be necessary to crop the rendered image later.

It is often possible to render a convincing view 180 degrees or more wide, where the subject has a strong central perspective. Only the soft squeeze can be used on such wide fields, as the hard squeeze has singularities (goes to infinity) at +/- 90 degrees.