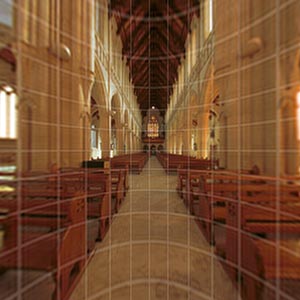 This is a type of projection for mapping a portion of the surface of a sphere to a flat image. It is also called the "gnomic", "gnomonic", or "tangent-plane" projection, and can be envisioned by imagining placing a flat piece of paper tangent to a sphere at a single point, and illuminating the surface from the sphere's center. Mathworld's page has an example and describes the mathematics underlying this projection.