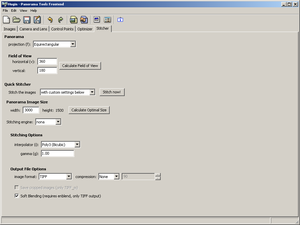 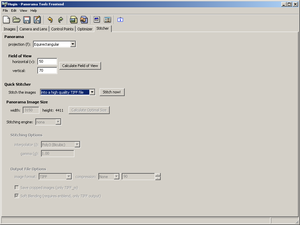 PTStitcher is the original stitching engine supplied with Panorama Tools, but now largely superceded by nona - Though you may want to use it for functionality that isn't available in nona such as morph to fit.

To use PTStitcher you need to find one of the original win32 or linux i386 binaries on one of the mirrors of Helmut Dersch's site; then place it in your $PATH, or specify the location in the hugin Preferences.

PTStitcher has the same options as nona plus:

exposure correction will adjust the brightness and colour of overlapping photos to reduce the effect of variations in lighting (such as those caused by a cloud moving in front of the sun). Don't use PTStitcher for this as hugin now provides much improved photometric correction in the hugin Exposure tab.

fast transform (f) speeds up computationally intensive projection calculations by interpolating positions rather than calculating them all. This results in a small, but usually unnoticeable, quality reduction. This is most effective when remapping single images where the ouput frame is filled, panoramas with lots of empty space or many input photos may be faster with the nona option to Save cropped images, which generates Cropped TIFF output.

feather width performs simplistic feathering of seams between input photos, use nona and the Soft blending with enblend option for much better (and slower) results.