EV stands for Exposure Value, clicking the Reset button will set it to the average of all the input image exposures or setting it to 0 (zero) will result in no exposure change being applied to the panorama.

EV is a standard photographic scale, each increase or decrease by one unit will change the exposure by the equivalent of one f-stop (ie. halving or doubling the exposure). It is worth adjusting the exposure here in hugin rather than later in an external image editor, since hugin uses the camera response curve calculated in the hugin Exposure tab to perform the correction in a linear colour space.

The average value isn't always wanted. If you see colour artefacts in bright sky areas, set this to the negative of the darkest input image - This has a side-effect of clipping brighter images.

This doesn't change any input image parameters, it just readjusts the output Field of View such that all the input images are visible. If the images are all off-centre, then there will be a lot of black space.

This is the horizontal and vertical angle of view of the output image.

Use the drop down list to change the output projection of the panorama, the list is exactly the same as that in the hugin Stitcher tab. Note that for some projections, the scroll-bar sliders to change the Field of View are disabled. If you are having trouble, switch to Equirectangular Projection, adjust the field of view and switch back.

This button horizontally pans the output, changing the yaw of the remapped images so they fit to the centre of the output frame. This is useful if there is a lot of black space on the left or right of the output. This also performs a Fit, equivalent to the next button.

Note that centering a Rectilinear Projection or Fisheye Projection panorama will change the perspective, this may be unwanted.

This doesn't change any input image parameters, it just readjusts the output Field of View such that all the input images are visible. If the images are all off-centre, then there will be a lot of black space.

Straightening the panorama optimises the roll and pitch of the input images without changing their relative positions, levelling the panorama in the process. This normally produces good results, if you need more accurate positioning, try adding vertical control points in the hugin Control Points tab.

Enter a numerical transform to rotate the input images without changing their relative positions - Effectively this rotates the entire panorama. Enter roll, pitch and yaw values in degrees.

The autocrop button adjusts the crop rectangle so that it is entirely within the image area, i.e. there will be no 'black' borders in the final stitched image. It does this by maximising the area of the rectangle rather than the width or height. 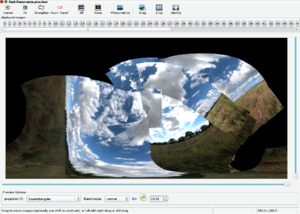 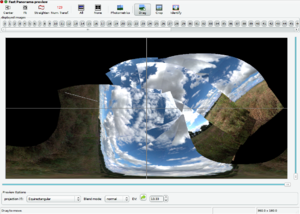 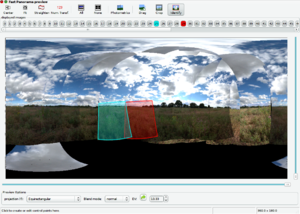 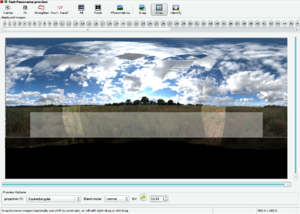