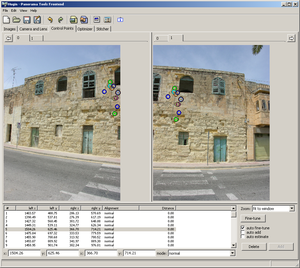 The control-points tab in hugin 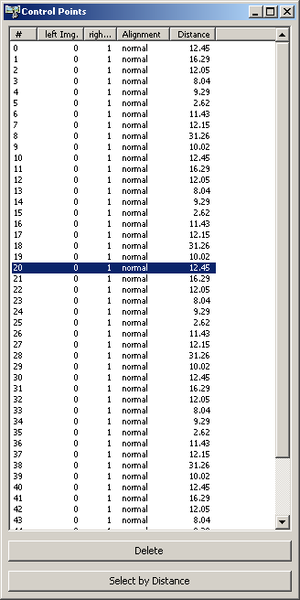 The Tab consists of two image displays and tab bars to switch images to be edited. The bottom contains a list view where Points can be selected and some fields to edit a selected point. Points can also be selected by clicking or dragging on them in the images. It is possible to zoom out to show the full image.

Adding a control point works by selecting one point in the left or right image, and then clicking onto the corresponding point in the other image. If auto add is not set, the points can be moved by clicking at some other place in the images. They are added to the list of control points by pressing the right mouse button, the a key or by pushing the Add button. If you press the right mouse button when only one point is selected, the point selection will be aborted. auto add adds the control point as soon as both points have been specified.

If the images are zoomed out (fit to window), the first click zooms to a temporary 100% view to give you the chance to refine your selection. Note that only the second click will trigger the auto estimate.

Often it is hard to select the corresponding point exactly. However, the control points should be as accurate as possible, for good results. Once a point pair has been roughly selected, the fine tune function of hugin can be used to estimate the corresponding point up to one tenth of a pixel. The keyboard short cut for the fine tune function is the f key. Fine tune only search in a small neighbourhood of the currently selected points. The size of this neighbourhood can be controlled by opening the Hugin Preferences panel and setting the Local area search width.

Note that the fine tune function estimates the translation of the patch around the point selected in the other image with respect to the current image. This works well if the rotation between the images is small and narrow angle lenses have been used. If wide angle or Fisheye Projection images are used, rotation search should be activated in the Hugin Preferences panel. Then hugin also searches for rotated occurrences of the patch around the selected point.

The image can be scrolled by pressing the middle mouse button or the CTRL key while moving the mouse. If the shift key is pressed instead, both images will be scrolled. This is very useful if control points are set using the 100% zoom level.

All these flags can be combined. I typically use auto fine tune and auto estimate at the same time. Then hugin usually automatically selects the second point correctly, at least for normal, Rectilinear Projection images that are not rotated too much.

hugin also includes an experimental control points creation algorithm. It can be invoked by pressing the g key. Corners in the currently selected image are detected, and corresponding control points are set based on the current relative positions of the two images. The images need to be approximately aligned already for this to be useful.

Use the mode pull down menu to change the type of an existing pair of control points.

The normal control point mode is used to align pairs of overlapping photos by matching identical features in both photos.

Select two points along a feature that you want to be aligned vertically or horizontally in the final panorama. If these are in the same photo, hugin will usually detect that you are trying to create horizontal or vertical control points and set the mode appropriately, if they are in different photos then you will need to set the mode manually.

Typically horizontal and vertical points are used either to level a spherical panorama or to correct perspective.

Create a pair of points in the hugin Control Points tab, then pick Add new line in the mode pull-down. This first line will be called Line 3, you can assign more pairs of points to it using the same mode pull-down.

Here is a summary of the keyboard shortcuts available in the Control Point tab: