With Photoshop CS2 it has become very easy to create true HDR (high dynamic range) images from bracketed exposure series. There is a nice tutorial by Brian Greenstone on how to assemble multiple exposures into one HDR file: [1]

He describes the necessary steps to compress the high dynamic range with photoshop built in "Local Adaption", too. However, sometimes it is very hard to get decent results this way. Two HDR compression plugins are now available for this purpose. Photomatix Tone Mapping plugin from HDRSoft and FDRCompressor from FDRTools.

Both plugins can be used on 16 or 8 bit per channel images, too. See RAW dynamic range extraction on how to extract the full dynamic range of a RAW file into a single 16 bit file.

I just played a bit with both plugins, so please don't expect the best possible results. May be someone with more experience can give better instructions.

Both plugins are currently only available for Windows, both have announced a Mac OSX version very soon. And both are available as stand alone programs for both Mac OSX and windows.

Many thanks to Raanan Fattal for letting me use his Belgium House HDR image: [2] 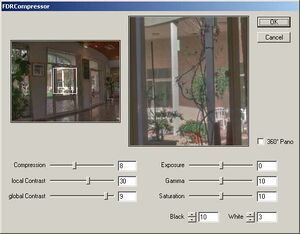 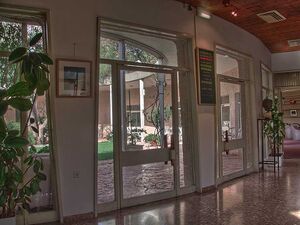 The plugin opens with a dialog where 9 parameters can be adjusted. However, according to [3] only 5 of them are relevant for most images (text taken from the page):

In this case no white and black point setting was necessary. The general appearance is good. No visible halos, detail contrast is ok, no reversed gradients, no artifacts. 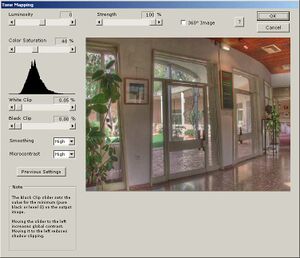 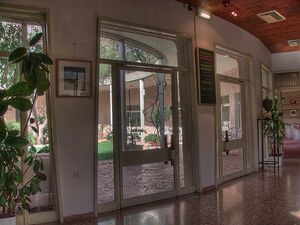 The Photomatix plugin opens with a dialog where 8 parameters can be adjusted. From the help file:

The image comes out with good contrast - white and black point settings are apparently done by the White Clip and Black Clip values. It is in 32 bit per channel mode too and has to be reduced to 16 or 8 bit. "Equalize Histogram" does not give better results here.

The general appearance is pretty good at the first glance, with good contrast for the outside scene and no reversed gradients.

At a closer look it shows little artifacts and some halos - the door frame is too dark where the bright column is behind. If you look at http://www.hdrsoft.com/ this could be a general problem of photomatix. The result resembles a bit the original Gradient Domain HDR compression result of Fattal, Lischinski and Werman.

The two plugins are very powerful tools for compression of real high dynamic range images like it would not have been possible only short time ago. They can compete with the most recent research on that topic.

The results are very similar, both have been sharpened slightly (the source images are a bit blurry). It is meaningless to compare the differences in contrast in my example - they most likely can be avoided or enhanced by choosing better parameters. More experience is needed here.

The FDRCompressor result does not show those flaws. The only critics from my side would be that it is harder to master than photomatix. The response if you change values is slow and the values are not intuitive. Preview is too small and does often not resemble the final result.

For your convenience here a side by side comparison of the result images: 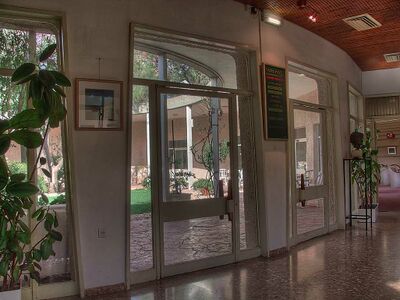 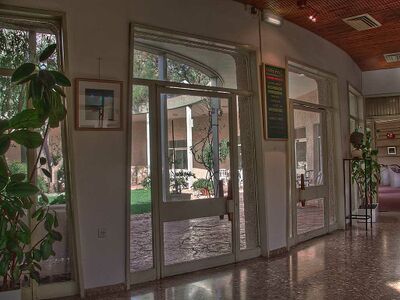