Difference between revisions of "Cylindrical Projection" 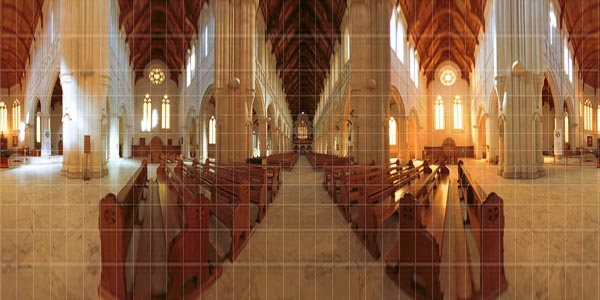 This is a type of projection for mapping a portion of the surface of a sphere to a flat image. It can be envisioned by imagining wrapping a flat piece of paper around the circumference of a sphere, such that it is tangent to the sphere at its equator. Shining a light from the center of the sphere then projects the spherical surface onto the flat paper. Mathworld's Page on the cylindrical projection shows an example and gives details on the mathematics.

In panoramic imaging, the cylindrical projection is most often used for prints of wide panoramas which occupy large range (>120 degrees) of longitude. Like the Equirectangular Projection, the cylindrical projection also preserves verticals, but it cannot represent data near the poles (nadir and zenith), which are distorted and stretched further and further to infinity.

Straight lines which are not vertical inreality become curved (other than the horizon). The horizon is mapped to a straight line across the middle of the image. Of course this only applies if the axis which the camera was rotated around was strictly vertical. If not the horizon is curved.

Other forms of cylindrical projections which can represent the poles, such as the Mercator projection common in map-making, are not typically used in panoramic imaging.