You can of course use a digital camera or you can use an anolog one and scan the results. What matters only, is that you'll probably want to use a camera with some zooming capacity. Since you are photographing a mirror, the camera and its tripod (or you) will be in the reflection. The further away the camera is, the less it blocks the view. Also, the larger the Field of View (FoV) of your resulting image will be.

I use Adobe Photoshop for this tutorial. Basically any version of Adobe Photoshop will work, as long as it supports the Panorama Tools Plugins. You can perhaps do it just as well with other software than Photoshop. If you do not have it, follow closely what I do and find a way to do it alternatively. Even better, add it your procedure to this tutorial. Of course you need the Panorama tools too. Optionally you can also use the Flexify plugin from Flaming Pear for the conversion. 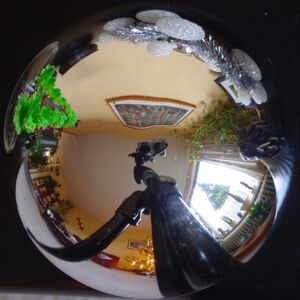 While this looks like a Fisheye Projection image, it certainly is not. First of all the FoV is close to 360 degrees, which is very uncommon for a fisheye image. Secondly, with a fisheye the number of degrees covered in the image with each millimeter you move away from the center is the same. That is a difficult sentence, so I'll give an example: Say you draw a circle with a diameter of 1 cm from the center of the image and that cicle covers 10 degrees FoV. Then a circle with a diameter of 2 cm will have a FoV of 2 x 10 = 20 degrees. And so on.

With this reflection, this is not the case. In the center part of the image the rule more or less holds, but as you get nearer to the edge of the ball, more and more degrees are crammed into a mm. Therefore you can not simply defish this image, but you'll have to convert it from "convex mirror" or "mirror ball" to Equirectangular Projection. To convert it you can use the Panorama Tools Plugins or the flexify plugin from Flaming Pear.

The Result of the conversion 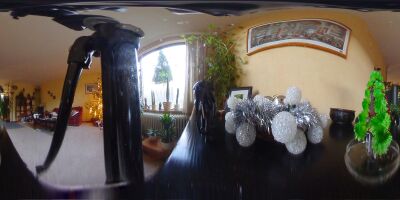 Fixing the Field of View (optional)

You can skip this part if you are not looking for optimal results. I don't, because if you skip it, you might have a sort of barrel distorted panorama.

Now we have an equirectangular image that is not twice as wide as it is high, but most Panorama Viewers require it to be. To fix that we enlargen the image, filling the extra part with black. From the Photoshop menu, choose Image - Canvas size. Click the middle upper arrow and change the height to half the size of the width. Set canvas extension color to black. Click OK. 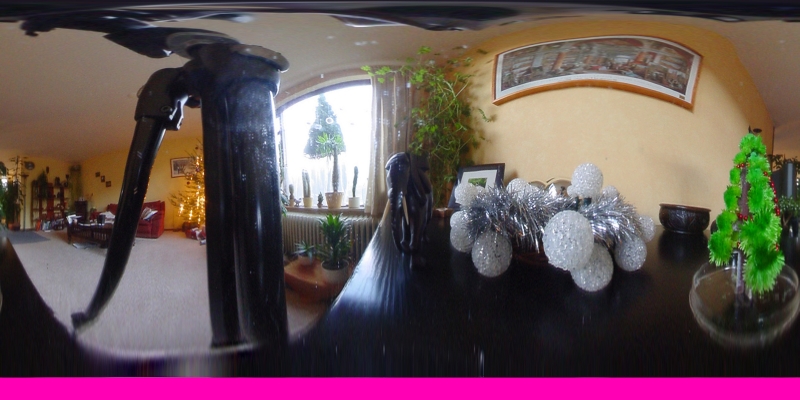 Below this line you can see an interactive example of the image above. Drag the mouse in the image to look around, use ctrl and shift to zoom. My christmas ball was far from round, as you can see :(

Save the image as JPEG and choose a viewer to see your panorama. For a choice of viewers, check the software page. PTViewer would be a good example of a small, easy to use panorama viewer.