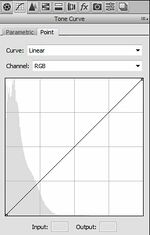 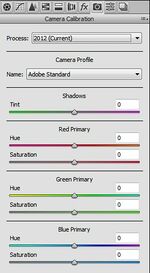 Sometimes it's not feasible or not recommended to shoot bracketed. Action scenes and large crowds f.e. or landscapes in windy weather, where lots of leafs and branches are moving.

This is a small tutorial on how to extract the full dynamic range of a RAW camera file into a single 16 bit per channel document using Adobe camera RAW (ACR) converter of photoshop CS6 (same engine as Lightroom 5).

Extracting the whole dynamic range is a snap in recent ACR. No need to fiddle with low contrast anymore, like described in the old article for photoshop CS2. The Highlights, Shadows and other sliders provide tonemapping-like adjustment and recovery of almost all data that is in the RAW file, making virtual bracketing virtually unnecessary.

Shooting for maximum dynamic range implies exposing such that no important highlights are clipped, since clipped data is lost forever. But it would be best to expose as high as possible in order to pull as much shadow details out of the noise floor as well.

The range of brightness values in relation to the sensor is usually displayed as a histogram. But that is a bit of a problem on most cameras. The histogram display and clipping indicators show the situation for jpegs, not for raw (only some Leicas use raw histograms when shooting raw). Jpeg highlight clipping is 1 or 2 EV lower than raw clipping. If you rely on those, you expose too low and details get lost in shadow noise. In camera inspection of raw images doesn't help either, since the display uses the same clipping as for jpegs.

However, there is help:

With raw zebras it is easiest to expose correctly, since all clipped highlights are marked with a zebra pattern. But raw histogram and clipping indicators are of incredible help, too. The result might look overexposed, but this is easily fixed during raw conversion and you will find incredible shadow details in the images.

Choose a linear curve on the Tone Curve tab. All Contrast curves will make highlights and shadows details less distinguishable and worsen clipping.

On Basic tab press the O and U key in order to activate Shadow and Highlight clipping warning. The small indicators in the upper corners of the histogram need to show a white border. Clipped highlights are shown as red area in the image, clipped shadows blue.

Now you can start to adjust the Highlights slider. Move it to the left until the indicator in the top right corner turns black. This is the exact point where there will be no highlight clipping any more. You might want to leave specular highlights (or the sun) clipped.

The Shadows slider needs to be moved to the right in order to lighten shadows. If the indicator in the top left corner turns black there is no shadow clipping any more. Colored indicators show which color channel is clipped.

If this is not enough to recover all dynamic range and your highlights are grey to white (f.e. cloudy sky) you can play with the Whites slider. The Blacks slider helps if the Shadows are dark grey to black.

If you want more visible shadow details pull down (left) the Contrast slider. This will give you a dull image, but you have the possibility to do a local contrast enhancement later.

Unfortunately some other settings influence the dynamic range, too.

You can save your settings to a preset. However, since dynamic range extraction highly depends from the image content, it's probably better to do it on an individual basis.

Don't forget to switch to 16 bit per channel output and choose TIFF as file format, before you save your images.

What to do now with these files? There are tons of possibilities to enhance the result. You can increase local contrast by simple high radius, low amount unsharp masking or by HDR tonemapping (most tonemappers, including photoshop, work on 16 bit images as well).

It can not be guaranteed that you can extract the very last bit of information from your RAW this way since we don't exactly know what the RAW converter does. However, it could well be that you get even more dynamic range from the converter than your camera actually captured.

How that? Color channels are not all saturated at the same level. If you f.e. use dcraw without the -n option you apparently get less dynamic range than from most other RAW converters. Dcraw clips the colors to the lowest clipped channel. If you use the -n option (and an appropriate -b value) you get anything the camera captured, including a single clipped channel. This might lead to very strange effects. However, ACR and other raw converters don't suffer from this shortcoming.

According to Dave Coffin (author of dcraw) most other RAW converters try to reconstruct the clipped channel from the other channels. This is why f.e. Adobe Camera RAW sometimes seems to deliver more dynamic range than dcraw in 16 bit mode does.